We will remember them

Every November Remembrance Day is special, but somehow the last two, coming in the middle of the 100th anniversary of the Great War, seem to hold even more significance. As we lose the last of the generation who fought in the ‘war to end all wars’ it is becoming increasingly important to record and preserve the memories of events which shaped our world.

Sunday November 8th was a particularly busy day at Tower Hamlets Cemetery Park as over 200 people attended the annual Remembrance Day service held at the War Memorial. Local people, councillors, Friends of the Cemetery Park, Scout and Army Cadets all took time out from their busty weekends to commemorate the sacrifice of a previous generation.

Two years into the national commemoration of the 17 million men and women who gave their lives during World War I, it was particularly poignant to read the names of the 205 men, some of them tragically young recorded on the 11 WWI plaques on the War Memorial. Every one was a special life and every one was loved and mourned by their family and friends, from the youngest, 16 year old G. W Ellerbeck who died on 21-11-18 to Rifleman B Pickhaver who died on the last day of the conflict, 11-11-1918. 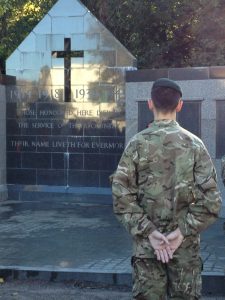 After a short service and the traditional laying of the scarlet poppy wreaths, a large group strolled through the autumn trees to the civilian War Memorial which commemorates local people killed during Zeppelin raids, the Blitz and other incidents which brought the full horrors of modern warfare all too close to home.

Although the day was a really sombre reminder of the lives lost during any conflict, it was also a thoughtful way for the current generation to show that they value the sacrifice of a previous one. 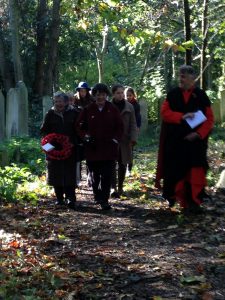