It will all be over by Christmas

The declaration of War against Germany in August 1914 was greeted with almost universal approval across Britain. The conflict was seen as just and thousands of men joined the long queues to sign up. One of the reasons for this enthusiasm was the firmly held belief that the war would be over by Christmas and that if the enthusiastic young men did not get themselves over to Europe soon the whole thing would be over and they would have missed out. This probably changed when reports started coming back from the Front detailing the heavy losses and train loads of severely wounded servicemen arrived back to receive treatment, especially after the Battle of Mons.

Famously, over Christmas 1914 a number of widespread but unofficial 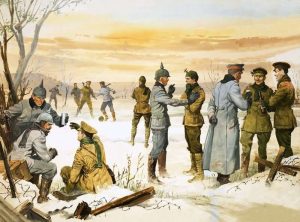 ceasefires ‘broke-out’ along the Western Front. French, German and British soldiers crossed No Man’s Land, exchanged seasonal greetings, chatted and shared their food. Joint burial ceremonies were organised and prisoners swapped while several meetings ended with carol singing. Games of football were played and the whole affair must have been surprisingly convivial, considering the gruesome battle ravaged surroundings.

The Christmas truces were not so widespread the following year due partially to strongly worded orders from the high command of both sides forbidding fraternisation. The war had also become more bitter during 1915 after the horrors of the Somme and Verdun and the use of poison mustard gas.

Every soldier, sailor and airman received an embossed brass gift box presented by the 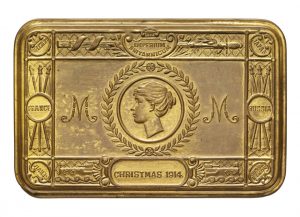 Princess Mary Gift Fund containing a variety of items including tobacco, chocolate, a Christmas card and a photo of the royal family. £162,000 was raised through public donations to fund this scheme. These boxes became treasures possessions and, once empty, were used to store letters and photographs from home.

Tragically the war was not ‘all over by Christmas but would drag on through three more long, hard years. 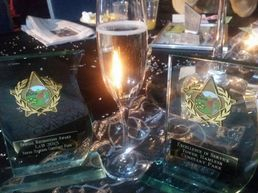 The team had a lovely time at the event, which was held at the Mile End Park Art Pavilion. We were very chuffed to receive the awards, especially as we had no idea that we had been nominated! A very nice surprise. Well done to all of the other winners.