We are delighted to announce the award of a grant of £9,800 from the Heritage Lottery Fund (HLF) for a research project entitled ‘Researching the names on the War Memorial in Tower Hamlets Cemetery’.

Awarded through HLF’s First World War: Then and Now programme, the project will research the lives of the 204 service personnel who lost their lives during War World One and are recorded on the War Memorial located in Tower Hamlets Cemetery Park. You can contribute your knowledge and any information you hold in family records:

Researching a soldier of the Great War

As more and more keen amateur genealogists, military historians and local researches become interested in the 100th anniversary of the Great War, an increasing number of invaluable sources are becoming available online and at local record offices. 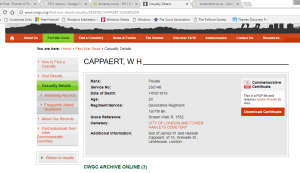 WW1 is the Commonwealth War Graves Commission  The man’s service number is particularly useful, especially if the name is a very common one – Smiths and Jones’ will appreciate this ! Additional detail might also include names and addresses of parents, siblings and wife.

Using this information pay-to –use sites such as Ancestry  and Find My Past will open up a wide range of further sources to investigate the man’s life before entering the military.

The 1911 census returns will list the occupations, birth places and

full names of the family. The number of children born and the number currently alive are also recorded. It is then possible to research whether brothers served in the War and whether they survived.  The family can hopefully be traced back through the census as far as 1841 and links can be made with weddings recorded in local parishes. London is particularly well documented in this respect and the records can provide addresses of the happy couple along with the groom’s and the respective fathers’ occupations.

Every service man had a detailed record kept from his attestation papers through his service record to his pension payment. The originals of these documents are kept at the National Archive at Kew Some of these are available from online research site but many were destroyed during the 2nd World War.

For the ones which survived, the information is amazingly detailed, from the man’s height and eye colour, the date they joined, their transfer between regiments or ships, promotions and even offences they may have committed and the resulting punishment.

Some of the records can include quite detailed and distressing information about the serviceman’s death. Our Tower Hamlets Cemetery Park men all died ‘at home’ which does not actually mean they died at their family’s home but is a term to distinguish those who died in Britain rather than in action or abroad.

With the date of death the researcher can use Freebmd to find the relevant information about the death certificate issued for each casualty and with the relevant year and quarter and the registration district a copy of the certificate can be ordered from the General Register Office.

Some detailed diaries have survived from different regiments and although these rarely mention any of the rank and file, they can give valuable detail about the regiments movements, their participation in specific battle and their allocation of troops.

Using these different sources it is easy to become ‘hooked’ on tracking down the life story behind a name on a monument. If you would like to research one of the 205 names on the Tower Hamlet Cemetery Park War Memorial please get in touch with the heritage team.