Funded by a generous £10,000 grant from the Heritage Lottery Fund, the Heritage volunteer are undertaking a project to research the 205 servicemen commemorated on the eleven plaques on the War Memorial. All of these men died during the 1914-18 Great War and, unusually for Commonwealth War servicemen, are buried in the cemetery.

To raise the profile of this major heritage project, the Friends held a series of talks based around the theme of WWI and its impact on the local area along with help and advice on how to research your family’s involvement in this historic period. Over 150 people called in to find out about the project and one of the talks was so popular it had to be re-run because we couldn’t fit everyone into the room ! And we were worried no-one would turn up !!! The Commonwealth War Graves Commission talk was particularly interesting because it explained how the beautiful Cemeteries built after the end of the conflict were designed.

The Soanes Centre was also full to overflowing with memorabilia 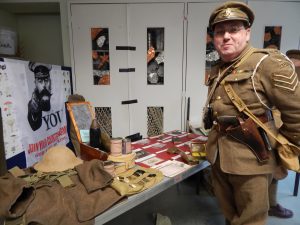 and local history stalls along with art work. Three splendid individuals from ‘Tommy 14/18 Great War Living History Enthusiasts’ decked out in authentic WWI military dress showed visitors both replica and original memorabilia including a reproduction of the ‘Wipers Times’ newspaper from the trenches at Ypres.

The day was certainly a real success for the heritage team as a number of people linked to named individuals on the War Memorial talked to us about treasured items and memories that they have of related to these family members. Several people also offered to help with the research project as we try and develop a whole picture of these men’s  lives before and during the war. 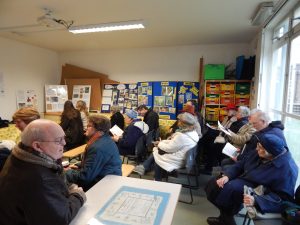 You may want to create a haven for orphaned frogs, a stop-off for dragon flies or a splash pad for the local birds. Be as creative as you like with your ideas.

Tweet your ideas to @FoTHCP using the hashtag #winapond and we’ll choose the best one. The winner gets one free pond liner courtesy of All Pond Solutions, an expert online aquatics retailer. If you win, we’d love to see a photo of your finished pond too!